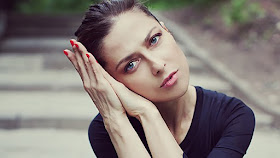 According to her byline posted at RussianLife.com, "Yuzik is a journalist and writer and the author of Brides of Allah, a book on Chechen female suicide bombers, which has been published in 10 countries, as well as Beslan Dictionary, which has been published in France, Italy, and Germany. She has been working in the Caucasus for over 10 years and has written for GQ and Foreign Policy, on Chechnya, the Caucasus, and terrorism. She is currently working on a book that is at once a collection of travel notes and a look at the mechanism whereby suicide bombers are created. It will describe in detail the methods that terrorists use to transform normal individuals into suicide bombers."

According to journalist Boris Voytsekhovskiy, who has been identified as the ex-husband of Yuzik, revealed that she faces up to 10 years on charges of cooperating with Israeli intelligence. Later, he told the RBC news website (on Friday), “They took her passport on arrival in Tehran and told her they’ll give it back on her departure.” He further added, “The Islamic Revolutionary Guard Corps broke into her hotel room yesterday and accused her of cooperating with Israeli security services.”

He also told Russian media outlets that Yuzik used to work as a correspondent in Tehran several years ago, and she returned to the Iranian capital last week at the invitation of an unknown party.

In 2016, Yuzik was nominated for the State Duma by the People's Freedom Party (also known as PARNAS party) as the head of the regional group for the North Caucasus.