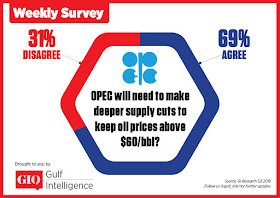 Gulf Intelligence (Sept. 4, 2019), OPEC will need to make deeper supply cuts to keep oil prices above $60/bl, according to 69% of those polled in GIQ’s monthly Energy Market Survey in August. At the start of July, OPEC, with Russia’s backing, agreed to extend to March 2020, oil production cuts of 1.2 million b/d, but Brent prices have struggled to hold steadily above the $60/bl mark. US sanctions on Iranian oil exports and heightened geopolitical tensions in the Gulf have seemingly failed to give any additional boost to prices.

Brent crude averaged comfortably in the mid $60’s during the first half of the year. In July, the average held at $63.92/bl but dropped to $58.93/bl in August. Weaker global economic growth forecasts and the ongoing trade dispute between China and the US are dampening demand sentiment. 45% of those surveyed said that OPEC should change its current strategy of prioritizing higher prices and instead fight for market share. OPEC next meets in Vienna on December 5th. 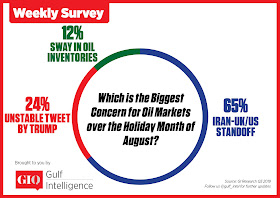 During July, the majority of those surveyed by GIQ felt the tanker standoff in the Strait of Hormuz between Iran and the UK, Washington and others would get worse before it gets better and the sentiment during August has remained the same, with 65% expressing it as their biggest concern for oil markets. 24% said US President Trump’s erratic tweets were the largest concern, while only 12% attributed their main worry to sways in oil inventories. 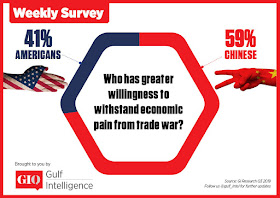 59% of those polled meanwhile said that the Chinese have a greater willingness than the US, to withstand the economic pain resulting from the new reality of trade tariff bargaining between the world’s two largest economies. As of August, the US had imposed tariffs of $250 billion on Chinese goods, and China tariffs of $110 billion on US products.
IndraStra Global at Wednesday, September 04, 2019
Share
‹
›
Home
View web version