Will Facebook’s Libra Scramble the Regulatory Calculus for Crypto Assets? 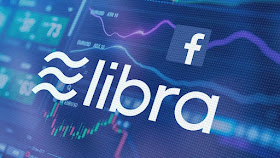 There are currently over 2,000 crypto assets like Bitcoin that can be exchanged for goods and services in many countries anonymously, instantaneously, and at any time. These emerging forms of private sector money, or cryptocurrencies, provide their units of account and are based on ledger technology such as blockchain which makes the falsification of transaction data difficult. Unlike cash, transactions using crypto assets are also technically traceable and a positive or negative interest rate can be charged, potentially improving the effectiveness of the monetary policy.

Yet, central banks and regulatory authorities around the world so far do not regard crypto assets as money, mainly because of the extreme volatility in their values that hamper their widespread use as a medium of exchange and store of value. Many crypto assets set a cap on the amount of issuance in advance to prevent their value from dropping sharply. Nevertheless, the value of crypto assets remains highly volatile, largely due to their lack of intrinsic value.

In addition, consumers and investors are not well-protected. Crypto assets are subject to technical and legal problems such as scalability; 51% attack and double-spending challenges; vulnerability to cyber-attacks; and susceptibility to money laundering and illegal activities.

In recent years, new types of crypto assets, called “stablecoins,” have emerged as a way of overcoming volatility problems. A stable value can be achieved since issuers supply users with stablecoins in exchange for legal tender or gold that can be accumulated to meet users’ requests for redemptions of legal tender or gold.

The original stable coin is Tether, issued by Hong Kong, China-registered Tether Limited. Tether Limited began to issue Tether in 2015 with its own unit of account, called USDT, with 100% underlying reserves comprised of US dollars and equivalents. Tether Limited is a central entity that functions solely as an issuer of Tether and a custodian of reserve assets. Tether is also issued against the euro with its own unit, EURT, which works in a similar manner but is limited in scale.

Facebook’s announcement in June that it will issue a global crypto asset called Libra in 2020 has captured significant attention. Facebook’s subsidiary called Calibra will provide financial services to smartphone holders participating in the Libra network. Once people open an account, funds such as US dollar funds can be converted to Libra to place in their digital wallet.

These services are expected to create new business opportunities for individuals and small firms and promote financial inclusion. Like Tether, Libra will be a stablecoin but one stabilized against a basket of reputable fiat currencies—similar to Singapore’s basket currency or the IMF’s special drawing right—and reserve assets will be maintained in bank deposits and short-term treasury securities denominated in those currencies. Therefore, Libra will be more volatile than Tether.

The Libra Association, headquartered in Geneva, Switzerland, was established as an independent non-profit entity to manage the whole system. It is responsible for the issuance or destruction of Libra, management of reserve assets, development of the Libra network, and promotion of financial inclusion. 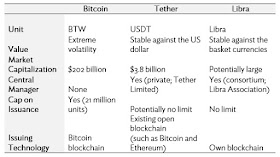 Source: Prepared by the author.

The sizeable resources and growth potential that Facebook’s Libra will bring to the stablecoin marketplace could portend a new era of recognition and supervision of crypto assets by financial supervisors.

An important issue is whether tighter regulation should be applied to stablecoins compared to other crypto assets. First, the borderline between crypto assets and money issued by central banks or the private sector is becoming unclear. Central banks and regulatory authorities may find it difficult to avoid regarding stablecoins as “money” if it is widely used as unit of account, medium of exchange, and store of value.

Second, stablecoins may increase more illegal and terrorist activities than other crypto assets. Concerns over financial stability risk must also be considered since the public may shift funds from retail deposits managed by local banks to stablecoins in the substantially low interest rate environment, or because capital flight can be more easily conducted from fiat currencies of unstable, unreliable governments.

Third, a shift from domestic fiat currencies to stablecoins may not only erode the effectiveness of monetary policy but also promote substantial depreciation, thus leading to foreign debt crises.

For these reasons, tighter regulations may be necessary. Examples could include requiring issuers to obtain licenses, such as those for money transfer operators or commercial banks. Effective regulations must also require international coordination or standardization of associated regulations.

This article was first published in Asia Pathways, the blog of the Asian Development Bank Institute, Tokyo, Japan.

Dr. Sayuri Shirai is currently a professor of Keio University (Japan) and also a visiting scholar at the Asian Development Bank Institute in Tokyo.

[1] Kharpal, A., All you need to know about tether, the cryptocurrency that could have ‘devastating’ effects on the market, https://www.cnbc.com/2018/02/02/tether-what-you-need-to-know-about-the-cryptocurrency-worrying-markets.html

DISCLAIMER: The views expressed in this insight piece are those of the author and do not necessarily reflect the official policy or position of the IndraStra Global.
IndraStra Global at Wednesday, August 14, 2019
Share
‹
›
Home
View web version