The Myanmar's Air Defence Command was formed during the late 1990s but was not fully operational until late 1999. It was renamed Bureau of Air Defense in the early 2000s (decade). In early 2000, Tatmadaw, (Myanmar's Military Junta) established Myanmar Integrated Air Defence System (MIADS) with help from Russia and China. 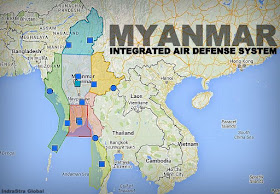 It is a tri-service bureau with units from all three branches of Myanmar Armed Forces. All Air Defence assets except Anti-Aircraft Artillery within Tatmadaw arsenal are integrated into MIADS. AAA guns are mostly unguided and deploy to use in barrage-style firing against attacking aircraft. MIADS is directly answerable to Bureau of Air Defence under Ministry of Defence.

Note: SOC's Zones (Colored Areas) are based upon assumptions made with proximity distribution

Sector Operation Centers and their Headquarters locations are:

Each SOC transmitted data back to Intercept Operations Centre (IOC), which in turn controlled SAM batteries and fighter/interceptor squadrons at various Air Bases.

Each IOC is optimized to direct either SAMs or fighter/interceptor aircraft against incoming enemy aircraft or missile. Each IOC was connected to observer and early warning area reporting posts (RP) via military owned underground fibre optic cable network.

There are more than 100 radar stations located at approximately 40 sites throughout the country. New Air Defence radars such as 1L117 RADARs, Galaxy Early Warning RADAR and P series RADARs are installed in all radar stations. 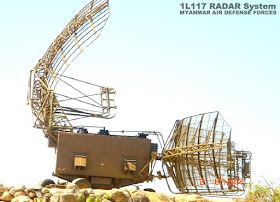 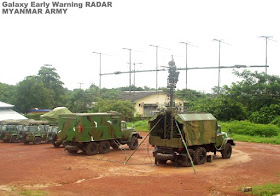 Each Sector Operation Centre (SOC) is commanded by a Major General and it consists of one air defence division from Myanmar Army and one fighter-interceptor wing from Myanmar Air Force. Sometimes Air Defence Frigates from Myanmar Navy also operates under the direct command of respective SOC.

Map Attribute: A typical SAM Site at Hmaw Bi Air Force Base
(This is an interactive map, zoom in for more details) 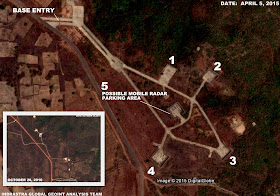 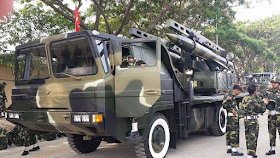 Image Attribute: Myanmar's HQ - 12/ KS - 1A acquired from China in 2015
Each Sector Operation Centre (SOC) is commanded by a Major General and it consists of one air defence division from Myanmar Army and one fighter-interceptor wing from Myanmar Air Force. Sometimes Air Defence Frigates from Myanmar Navy also operates under the direct command of respective SOC.

Each Air Defence division is commanded by a Brigadier General and consists of three Air Defence Tactical Operations Command (TOC) and support units. 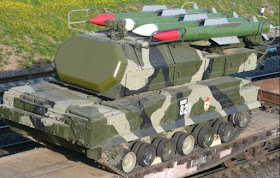 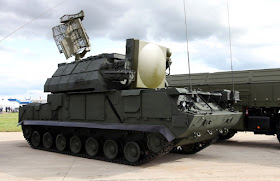 One Electronic Reconnaissance Tactical Operations Command (EIR-TOC) with 6 to 8 radar and communication companies for early warnings and interdiction detection. 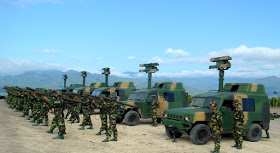 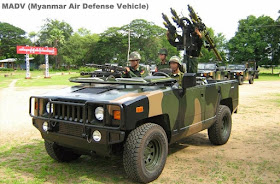 Image Attribute: MADV 2s are upgraded version of MADV and fitted with the fighting module which can accommodate twin Igla-S (SA-24) and a 14.5mm HMG. 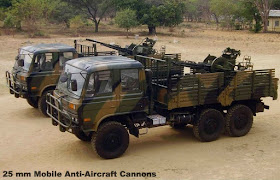 Further, Each MIADS's Sector Operational Center is supported by a fighter-interceptor wing commanded by a Brigadier General and is composed of three Fighter squadrons of either MiG-29 and F-7M Airguard / Interceptors (ten aircraft per squadron) and their ground base support units. 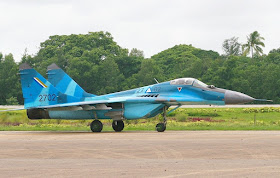 Myanmar is the only country in Southeast Asia to be steadily increasing the size of its armed forces. Dominated by the Army, a strong and increasingly well-armed force, the military is now double the size of what it was in 1988. The recent advancement in air defense systems along with forces training and deployment is definitely going to play a very critical role in any future conflict pertaining to South East Asia geo - political theater. However, the main question is about Myanmar's capability and capacity to perform an act of balancing when it already has two geo-political powers as next door neighbors.