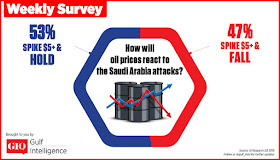 Gulf Intelligence (Oct. 9, 2019), Almost half of those polled in GIQ’s monthly Energy Market Survey in September were proven correct - that the attacks on Saudi oil facilities in mid-September would not cause a permanent spike in oil prices. 47% of respondents said oil prices would rise about $5 but then fall, while 53% wrongly said prices would hold after spiking.

The attack, which happened on a weekend on September 14 at Saudi Aramco’s oil processing facilities at Abqaiq and Khurais, cut off 5.7 million b/d of production, the equivalent of 5% of global oil supply. In the immediate aftermath, market watchers expected prices to go sharply higher. They initially did increase nearly 20% at the start of trading in Asia but had retracted by 5% when US markets opened.

A combination of plentiful global supply dampened oil demand and reassurances by Saudi Arabia that production would be promptly restored as well as having sufficient supplies to maintain exports for a month, all contributed to placing a natural cap on prices. 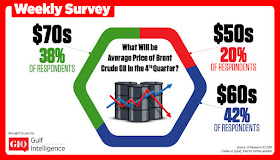 And sentiment has become even more bearish since. Brent crude prices in September averaged $62.83 a barrel while in October, they have so far averaged $58.78. When asked to gauge what the average price would be during the fourth quarter, 20% of respondents said in the $50s, 42% said in the $60s, with 38% more optimistic and predicting an average in the $70s. 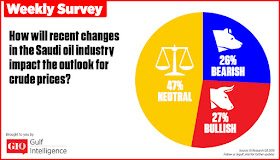 Another significant energy development in the kingdom during September was the establishment of a standalone Ministry of Industry and Mineral Resources, separating it from the Energy Ministry, in addition to changes in personnel at the helm of the Energy Ministry and Saudi Aramco. The majority (47%) of those polled in the GIQ survey felt these reshuffles would have no impact on oil prices. 26% said the moves would be bearish while 27% saw it as positive for oil prices. 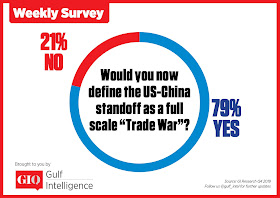 Meanwhile, 79% of survey respondents said they would now define the US-China trade standoff as a full scale “Trade War”. The uncertainty created by the ongoing tariff spat between the world’s two largest economies is being labeled as the dominant factor weighing on global GDP and energy demand growth.