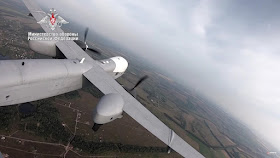 On August 20, 2019, Russia’s Ministry of Defence (MoD) announced the debut flight of the latest reconnaissance six-ton drone Altius-U (Board number 881). The UAV flew in fully automatic mode at an altitude of about 800 meters, or 2,600 feet for 32 minutes.

A video of the reconnaissance drone’s debut flight was posted by Russian MoD in its YouTube page. The video showed the drone on the runway of a military aerodrome and making its first flight. According to ministry press release, the drone has an endurance of over a day and can be controlled via satellite, giving it practically unlimited range.