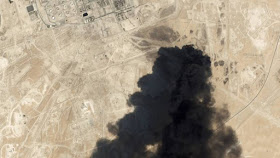 
On September 14, 2019, Saudi Arabian oil installations belonging to Saudi Aramco in Abqaiq province (near Dammam) and Hijrat Khurais oilfield were attacked by 10 armed drones launched by Houthis of Yemen (as claimed by Yemeni TV channel al-Masirah). Saudi Aramco's industrial security teams controlled and extinguished the fire before the spreading of the flames.

"We promise to widen our attacks as long as the Saudi regime's aggression and economic blockade against our country continue," Houthi military spokesman Yahya Sarea was quoted as saying after Saturday's attacks. The attack is the biggest on Saudi Arabia’s oil infrastructure since Iraq’s Saddam Hussein fired Scud missiles into the kingdom during the first Gulf War.

The attacks resulted in "the temporary suspension of production operations," Saudi Energy Minister Abdulaziz bin Salman said Sunday in a statement. These drone-led attacks have halted about half of the supplies from the world's top exporter and raised global concerns over oil supplies.

According to BBC Business, at the start of trading on September 16, Brent crude soared by 19 percent to $71.95 a barrel, while the West Texas Intermediate rose by 15 percent to $63.34. The U.S. Department of Energy said it’s prepared to dip into the Strategic Petroleum Oil Reserves if necessary to offset any market disruption.

The tensions in the region are running high since June attacks on oil tankers near the Strait of Hormuz while they transited the Gulf of Oman. Both, Riyadh and Washington blamed on Iran. Tehran denies the accusations.

Last month, Iran-aligned Houthi fighters have also launched attacks over the border, hitting Shaybah oilfield with drones and two oil pumping stations in May 2019. Both attacks caused fires but did not disrupt production like this time.

Most of these attacks were claimed by Houthis so is the recent one. And, this time US President Donald J. Trump and Secretary of State Mike Pompeo have already pointed the finger directly at Iran.


“Saudi Arabia oil supply was attacked,” Trump said on September 15 on Twitter. “There is reason to believe that we know the culprit, are locked and loaded depending on verification, but are waiting to hear from the [Saudi] kingdom as to who they believe was the cause of this attack, and under what terms we would proceed!”

Iran has rejected a US claim that it is responsible for drone strikes on Saudi Arabian oil installations. And, it warned that U.S. land and naval forces in the region were within range of its missiles.