India at G7: A New India-France Bonhomie at Play? 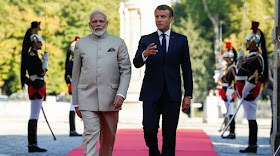 During the last week of August 2019, India participated in the outreach session of the 45th G7 Summit in Biarritz (France) as a special invitee. This gesture from French President Emmanuel Macron was timely and has reinstated the geniality between the two nations. The European country’s recognition of India as a consequential player in the world order is the reflection of the crucial position that India has been assuming as a rising economic power that can also add relevance to the G7. Among many other reasons, the "invite" provided India a huge platform to set its agenda straight for its issues related to its internal security (and stability) as well as other important global matters. Whether this has provided an avenue for India to join the G7 grouping as a member is unclear.

Prime Minister Narendra Modi seemed to have astutely used the opportunity to meet the leaders of significant countries (including the United Kingdom, and the United States) and the Secretary-General of the United Nations on the sidelines of the summit. The bilateral talks were centered on further cementing India’s relations with these countries. But what dominated the agenda was India’s stand on the Kashmir issue and to reassure its pledge for a sustainable environment by combating "climate change", which was one of the primary focus areas during the summit.

As India stood steadfast about the Kashmir issue being strictly bilateral, U.S. President Donald J. Trump concurred with India’s standpoint and reinforced international support for India. While the abrogation of Article 370 from the Indian Constitution is upheld as an internal issue by the Indian government, it was made clear that the larger Kashmir issue shall not be open for any third-party interference. The timing of this invite set the right ground for India to play its trump card against Pakistan’s call to the world to tend to the Kashmir issue.

So, where does India’s relations with France, that enabled this unprecedented platform for India, figure? The Indo-French relations are now strategically positioned for India to drive home some of its interests that converge with that of France. Both countries share a bond that has spread its tentacles into various fields of cooperation. The critical aspect of this relation and Modi’s foreign policy commitments were witnessed when he took successive trips to France, first for the bilateral meeting and then for the summit after his visit to UAE and Bahrain in the interlude. Few days after the summit, the National Security Advisors of these two countries held a meeting to strengthen the strategic partnership. The Rafale deal was part of the agenda. These multi-level meetings and acknowledgments bring to the forefront the deepening ties between India and France. During his visit, Modi was set to forge this relationship better with yet another innovative acronym. Quoting his statement in his speech at UNSECO in Paris: “Today in the 21st century, we talk of the INFRA. I would like to say that for me it is IN+FRA, which means the alliance between India and France”.

India and France have agreed to join together for partnering in different domains including outer space, maritime security, defense, among others. The civil nuclear cooperation has been a sturdy backbone that balances this relation. Both the countries have been keen on renewable energy development and generation which has brought them together to take it further under the garb of the International Solar Alliance (ISA).

France views itself as an important stakeholder in the Indian Ocean Region (IOR), majorly due to its overseas territories of Réunion and Mayotte and much specifically, the vast area of Exclusive Economic Zones (EEZs) held by the two islands. Yet another convergence of interest to secure the Indian Ocean was identified by India and France which consequently was manipulated into a series of collaborations and agreements. This includes Naval exercises, participation in the Indian Ocean Naval Symposium, White Shipping Agreements and launching Surveillance Satellites. Further, both the democracies believe in freedom of navigation in the high seas and have ensured to place maritime security as a “domain of excellence in their strategicpartnership”. The partnership between these two countries showed signs of maturity as they formulated Joint Vision documents to realize better dividends from the efforts put in the outer space and maritime domain.

For India, France is also a catalytic determinant in its relations with the European Union (EU), which is one of the main trading partners of India. Though the bilateral relations between India and certain other European countries like Germany have been enjoying healthy progress, the one shared between India and France has evolved into a privileged relationship. Though calling this partnership an "alliance" would be a misnomer according to the Indian "vocabulary" of diplomacy, the relations seem to be showing shades of the nature of an alliance. It is also timely as India has been breaking many status-quos that hindered its national interests, few of them needing international backing like that of the issue of Article 370.

A word of caution is that relations between different nation-states are accompanied by opportunity costs and exciting optics might always not have too much to read into. Yet, the blooming bonhomie between India and France is likely to follow an upward trajectory, more so when the Indian Foreign Policy has been diversifying its strategic options and opportunities. But this relation which is currently enjoying "winey" weather will be put to greater test eventually like any other middle-power partnership. Can France also be an ‘all-weather friend’ for India, like how Russia is claimed to be? At this juncture, what can be deduced fairly is that the India-France saga will preponderate over many other matters in the foreign policy orientations and pronunciations of India in times to come.

DISCLAIMER: The views expressed in this insight piece are those of the author and do not necessarily reflect the official policy or position of the IndraStra Global.
IndraStra Global at Wednesday, September 11, 2019
Share
‹
›
Home
View web version