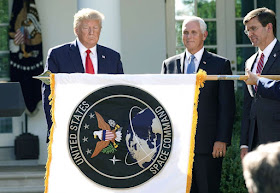 
On August 29, 2019,  as per the directives from U.S President Donald J. Trump, the U.S. Secretary of Defense Mark Esper signed into the creation of 11th war-fighting command - United States Space Command (SPACECOM). Kindly do note, SPACECOM is technically newly reactivated command which initially being operated from 1985 to 2002. It was shuttered in 2002 after the 9/11 terror attacks in New York resulted in military focus shifting to homeland defense and counter-terrorism.

"This is a landmark day, one that recognizes the centrality of space to America's security and defense," President Trump said in a White House ceremony. He further added, "SPACECOM will ensure that America's dominance in space is never threatened."


According to Esper, the command will "ensure the protection of America's interest in space." He further added, "As a unified combatant command, the United States Space Command is the next crucial step towards the creation of an independent Space Force as an additional armed service."

The so-called reactivation of SPACECOM happened because of President Trump June 2018's order to the DoD to create a much larger Space Force, a dedicated branch of the military equal to the existing forces, the US Army, Air Force, Navy, Marines and Coast Guard. It would require Congress's approval. Some in the Pentagon, including the former defense secretary James Mattis, have opposed the idea as "unnecessary" and "creating a new bureaucracy".

As of now, the newly reactivated command will stay at Peterson AFB (which used to be headquarters of the previous Space Command), with additional personnel and functions at Schriever AFB — just east of Peterson outside of Colorado Springs — Offutt AFB, Nebraska, and Vandenberg AFB, California.