Reassessing Kashmir in the Land of Rishi Kashyap 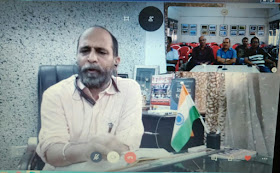 That was an amazing interaction with a senior journalist based in Jammu which was organized through the video-conference at a time when there is wild rumor that entire Jammu & Kashmir was under strict internet censorship as a precautionary measure by the government following the revocation of Article 370 & 35A and also reorganization of the northern State in August first week 2019.

He categorically pointed out that the government had the legal and constitutional mandate to deal it with the manner it deems fit. Jammu & Kashmir was under President’s rule and hence the legislative power of the State in accordance with the constitutional provisions lied with the Parliament and the Centre took the route of Parliament to bring in the bill to make necessary changes in Article 367 and Article 372.

Organized in the backdrop of historic decision by the Union government in New Delhi to revoke Article 370 & 35A and reorganize Jammu & Kashmir into two union territories that followed the detention of local leaders, restriction of communications and also public movement in the Kashmir valley, Ganju asserted that Panun Kashmir’s ideology was vindicated as everyone about its demand for abrogation of these articles.

Recently, not less than 600 eminent displaced Kashmiri Hindus along with their supporters, including Ganju, welcomed the removal of Article 370 and geopolitical reorganization of Jammu & Kashmir and Ladakh in two union territories. Displaced Pandits of Kashmir, who are taking shelter in various parts of the world, believe that it was the foundation where the prejudiced J&K Muslims flourished in secular India.

Speaking about the possibility of a return by hundreds of Kashmiri Brahmans to the Kashmir valley, Ganju pointed out their homecoming must be addressed in terms of historical aspect than a cosmetic contemporary understanding. Moreover, adequate safety, security, and dignity should be the cardinal of any policy on their return and rehabilitation.

Kashmiri Pandit families have suffered genocide and their presence in the valley has been eventually reduced from cent-percent to hardly three percent now. Replying to queries on the successful return of Pandit families to the valley, he, however, commented that time and situation are yet to be conducive for their return

Though Kashmiri Pandits are the aboriginals of the valley with first and uncontested claim over the resources, their demand for a centrally administered region carved out of Kashmir valley should be acknowledged, he asserted adding that in every foreign attack Hindu families were made to pay heavily in Kashmir as they were subjected to arson, humiliation, and displacement from various localities like Muzzafarbad, Gilgit, Baramulla, Poonch, Rajouri, Mirpur, Bhimber, Kotli, Skardu, etc.

In course of discussions, Ganju mentioned Rajatarangini, an authentic historical chronicle on rulers of early Kashmir and its neighbors, written in Sanskrit by Kashmiri Brahman historian Kalhana. Penned sometime in 1148- 50, the book has descriptions of Maharaja Jaisimha as the last great Hindu ruler in Kashmir.

For some time, Kashmir was a part of Maurya emperor Ashoka’s Buddhism empire. Kashmir once emerged as a flourishing center of Buddhism when Buddhist scholars, intellectuals, and followers frequently visited the place. Great Ashoka also developed Puranadhisthan (present-day Srinagar) and repaired numerous temples, pagodas and old shrines. Rajatarangini has cited Amritprabha, popular queen of Meghbahan, who hailed from Assam (then Kamrup). Another important king of Kashmir, Lalitaditya had maintained a friendly relationship with Kamrup king Bhaskar Barman. Then most of the local population was worshippers of Shiva (one of Hindu Trinity after Brahma and Vishnu).

Narrating the recent political history of Jammu & Kashmir (J&K), Ganju claimed that Maharaja Hari Singh had all moral, ethical and legal rights to decide upon the accession of his kingdom with either dominion (India or Pakistan) and the king duly signed the treaty of accession with Indian Dominion on 26 October 1947.

J&K Maharaja was seeking a better deal with both the Dominions before finally making its mind. The unwanted aggression of Islamabad through Pakistani Army regulars and tribal forces into the erstwhile province of Jammu & Kashmir later compelled the king to seek assistance from New Delhi and eventually he signed the Instrument of Accession. Talking about the petition filed by India in the United Nations after Pakistan’s aggression, Ganju made it crystal clear that it was strictly on the aggression of Pakistan into Jammu & Kashmir, which had already become a legal territory of India following the official consent of J&K Maharaja.

Adding further he revealed that the Centre was simply pampering the separatists of Srinagar valley through a kid glow treatment prostrating interest of the nation and the supremacy of its Constitution to the whims of Kashmir region. The nation-state over 70 years now unfortunately incentivized separatists including the so-called mainstream political parties of Kashmir region and ultimately continued penalizing the nationalists of the region.


Nava Thakuria is a journalist based in northeast India.

DISCLAIMER: The views expressed in this insight piece are those of the author and do not necessarily reflect the official policy or position of the IndraStra Global.
IndraStra Global at Wednesday, August 28, 2019
Share
‹
›
Home
View web version