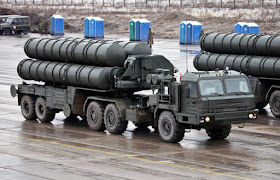 On August 29, 2019, the press office of Russia’s Federal Service for Military and Technical Cooperation revealed the settlement of advance payment by India for the delivery of S-400 Triumf (NATO reporting name SA-21 Growler). The report has come days after India's External Affairs minister S. Jaishankar visited Moscow to hold talks with his Russian counterpart Sergey Lavrov.

Back in 2015, New Delhi announced its intention to acquire Russian-made S-400 surface-to-air missile systems. The delivery contract worth US$ 5.43 billion was signed by Russian President Vladimir Putin during the 19th India-Russia Annual Bilateral Summit in New Delhi on October 5, 2018.

"The contract for S-400s will be implemented in compliance with the accords reached and the documents signed. The issue of making an advance payment under the contract has been resolved. We are not commenting on the details," the press office said.

The above-mentioned statement came within 24 hours of Russian Embassy in India Minister-Counsellor Roman Babushkin clarified that the missile system will reach the Indian armed forces in the next four years. He said, "The term of the contract’s implementation is well known: by 2023, these systems must be delivered to India. Russia is ready to take all necessary efforts to follow the time parameters of this agreement. We proceed from the fact that the contract will be implemented in full in accordance with the interests of both countries and the accords reached. We intend to strictly comply with them."

Kindly do note - the United States has warned countries trading with Russia's defense and intelligence sectors they would face automatic sanctions under a sweeping legislation called Countering America's Adversaries Through Sanctions Act (CAATSA) that President Donald Trump signed into law on August 2, 2017. However, there is an option called "waiver" in Section 231 of the CAATSA, which has been signed into law by President Trump in August 2018. But, it can only be granted under certain "strict" conditions. To get that waiver, the administration has to certify that a country is reducing arms imports from Russia and is expanding defense cooperation with the United States.

The S-400 'Triumf' is the most advanced long-range air defense missile system that went into service in Russia in 2007. It is designed to destroy aircraft, cruise, and ballistic missiles, including medium-range missiles, and can also be used against ground installations. The S-400 can engage targets at a distance of 400 km and at an altitude of up to 30 km. Russia has also signed the contracts for the delivery of these systems with China (the first customer) and Turkey.