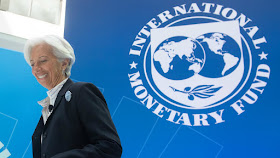 Image Attribute: The outgoing managing director of IMF Christine Lagarde who has been was tapped to head the European Central Bank. / Source: France24

The Executive Board of the International Monetary Fund (IMF) made the following statement on August 21, 2019:

The IMF Board of Governors, which represents the 189 member countries according to their voting shares , is requested to vote on the proposal. A simple majority of the votes cast is required to adopt the proposal, with a minimum participation requirement of a majority of Governors holding two-thirds of the total voting power. Voting is scheduled to run from August 21 to September 4.

"The IMF Executive Board is engaged in the selection of a successor to outgoing Managing Director Christine Lagarde, who will step down on September 12. Nominations to the position close on September 6, 2019, and we intend to complete the selection process by October 4."

Analysts said the removal of the age limit for the IMF's managing director could pave the way for Bulgaria's Kristalina Georgieva, the European candidate for the IMF post, to succeed Lagarde. Georgieva, who turned 66 this month, has been chief executive officer (CEO) of the World Bank since January 2017 and is currently on a leave of absence following her nomination as a candidate for the next managing director of the IMF.

About IMF's Board of Governors

The Board of Governors is the highest decision-making body of the IMF. It consists of one governor and one alternate governor for each member country. The governor is appointed by the member country and is usually the minister of finance or the head of the central bank.